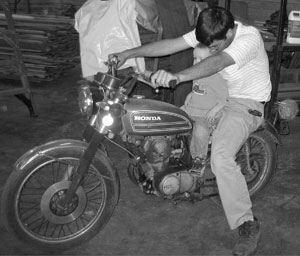 The Nautilus Tuning story begins with a complete engine overhaul of a 1974 Honda CT90 by a young boy, age 13. Armed with a Clymer manual, insatiable curiosity, and youthful exuberance, that CT90 became a quick pile of parts. After acquiring new rings & piston, and a freshly honed cylinder, the pile of parts slowly grew back into a completed engine. The new piston & rings, coupled with cleaned and adjusted valves led to the feeling of a little more snap from the little 89cc motor. Imagined or real, that perceived increase in power planted a powerful little seed…

It seems these old Honda bikes have an uncanny and powerful generational grip of some sort. Find a guy who wants to buy an old CT90 or CB350, and chances are very high that many years ago he or his father or brother or uncle had one as well. Still fresh in my memory are multiple snapshot of these old bikes; as a 6 yr. old riding on the back of a CT70 with my father, and as an 8 yr. old piloting my uncle’s CT90 up Pennsylvania trails. Many years later when I stumbled across two old Honda bikes (a CT70 & CT90) cowering in a dusty barn in upstate South Carolina, I knew I needed to get my hands on them.

Now, many years later, a 1970 CT90 lies gutted on my workbench while two boys “help Daddy”, anxious for their turn astraddle an old Honda. Make no mistake, they will have to wait until Daddy has a pass (or two) “just to test it”. 🙂

The name, “Nautilus Tuning”, is a hat tip to the imagination, ingenuity and complexity of Captain Nemo and Jules Verne. 20,000 Leagues Under The Sea was my favorite literary work from the moment I first read it decades ago. Nemo is undoubtedly a complex character, in many ways an antihero. Yet that raw, dark edge, coupled with his mechanical,  design and engineering skills is what made him so intriguing to me.

“changing in the changes”